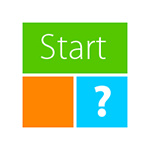 Windows 8 looks to be the biggest leap in operating systems since Windows 95 with a very fresh approach both in terms of aesthetics and usability. Microsoft is of course making lots of big and bold claims about the performance of Windows 8, which may or may not be accurate, but I’m more interested in its ‘full circle’ icon design and style.

For this new Windows 8 release, Microsoft has adopted ‘metro’ style icons – which is essentially, as I understand it, single-colour ‘flat’ icon design. I describe this as full circle because the very first icons to appear in operating systems and software packages were single colour silhouette and outline style with limited detail but, in most cases, they were recognisable. From various screen shots and videos that I’ve seen, these metro icons are often used in conjunction with bright, primary colours and squares to create an interesting looking interface. It’s certainly a different approach to anything that has gone before it in terms of desktop operating systems and, as has been frequently commented in many an article, lots of effort has gone into giving the mobile and desktop Windows a common theme and feel. It’s also worth noting that this bold, clean icon style is the standard followed in health and safety signage, ensuring that the icons are simple and immediately recognisable, rather than detailed and easily confused from a distance.

It will be very interesting to observe how other big players, read: Apple, will steer the icon design style for their future releases. Apple is synonymous with stunning, detailed icons in full colour which is of course as far away from Microsoft’s style as it’s possible to be. I suspect that even if Apple does not follow the trend (I’m not sure it could bring itself to do so anyway), we will still see a big wave of icons for windows sets in the clean metro style. I personally like the style in terms of aesthetics and usability, but I have to question how far can you go using colour-less silhouettes? I’m sure the possibilities will run out sooner rather than later, and I’m sure that there will be endless near-identical icon sets floating around both in GUI and icon set downloads. Perhaps this is where Microsoft has been clever, knowing that evolving the style is not really feasible so they will keep a unique look and feel. We shall see!