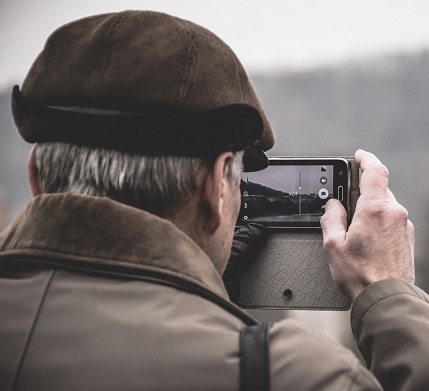 Technology is the preserve of the young, and it often spills over into design. Think about it – how many 50 or 60 year-olds are web designers or developers? Designers within the tech sphere are young and this is reflected in the products they create. Rarely do you find icon designers asking questions about how their designs might help make life easier for an elderly person.

A ‘We Are Apps’ report from 2012 indicates that while smartphone ownership in the UK was well above 50% in the majority of age groups, there was a significant dip in ownership for those older than 65.

These figures point to the fact that while there are fewer senior citizens using the internet to access websites or using mobile phones to complete actions, there is still a significant number of elderly people who interact with technology on a regular basis – a number too significant to ignore.

Designing for kids but how about the elderly?

So much emphasis has been placed on designing icons for kids, leading to an increasing number of operating systems and programs are being designed with children in mind. One example is the Windows 8 operating system designed for phones which had the Kid’s Corner feature added to it. When activated, the feature prevents the kids from accessing unsafe or important features such as email and contacts, while allowing them access to videos, music, and apps.

Another example is YouTube Kids, which provides children access to strictly family-friendly content. YouTube Kids is only one of many apps designed for this demographic of users. While the demand for apps and software for children is growing at an exponential rate, it is hard to say the same for apps for the elderly.

It’s not strictly about age but about needs and preferences

When it comes to designing icons for children, one major consideration is the age bracket you are designing for. Icons designed for children between 3 and 5 years old will be different from those designed for children between 10 and 12 years. For older people, it is more about their unique needs and the way they use their phones and computers. For instance, an 80 year-old might have better eyesight than a 70 year-old. It would be wrong to assume that an older person might be having a harder time than a younger person solely based on their age.

While it is true that different persons might have different levels of need, there are certain human abilities that deteriorate with age. For example, icons should not be designed with fonts that are too small considering that advancement in age is commonly associated with reduced vision. The eye becomes less capable of differentiating between shades of purple and blue, adjusting to rapidly-changing brightness, or focusing quickly. This rule applies to websites too. That’s why it helps to use accessibility-focused website builders such as the one provided by Umbrellar Cloud Hosting.

Like sight, hearing loss might deteriorate with age and make it difficult for the ears to pick up sounds at extremely low or extremely high frequency. While 70 dB is okay for younger persons, 90 dB is recommended for senior citizens with age-related hearing loss.

As we age, our cognitive functions such as memory, decision-making, and attention might be affected in various ways. The prospective, episodic, and short-term memory are the most likely to deteriorate over time, meaning many senior citizens may have problems remembering to perform certain tasks in the future or understanding how complicated new concepts are to be combined in an interface or product.

Often, older people make use of diaries and calendars to supplement their memory. Technology designed with these factors in mind can be exceedingly useful for prompting a senior user to perform important tasks.

While ageing is generally associated with decline, older persons often do better in thoroughness, persistence, and attention span. This means, older users might explore more and focus more on certain features, while younger people may be more inclined to multitask.

James is a business psychologist and serial entrepreneur, with over a decade working in finance, IT, marketing and recruitment sectors. He has authored numerous books in the management space and is Founder and CEO of www.dailyposts.co.uk.