This week saw the release of Apple’s new (and much hyped) iOS 9, the primary operating system for all of its mobile devices – in particular, the iPhone and iPad.

iOS 9 boasts a range of new features and functions, including improved mapping, note-taking capabilities, multi-tasking, and customisation. While it was the much earlier iOS 7 that saw the introduction of a radical overhaul of the operating system’s GUI, last year’s iOS 8 did bring a range of visual tweaks.

While the changes made in iOS 9 are more oriented towards functionality, the new OS has a number of important implications for designers and programmers. Today, we’re going to explore what these mean for mobile visual design as a whole – if it means anything at all.

There’s a new font in town

Typeface is undeniably important in visual design, whether you’re reading a book, a webpage, or a system menu.

Apple have long used Helvetica Neue as their default font of choice. It’s been a system-wide staple of both OS X and iOS since the birth of iOS itself. However, with the release of iOS 9, all of that is about to change.

Enter San Francisco, Apple’s new font of choice. Its introduction to iOS brings the system in line with the look of the Apple Watch, which has used San Francisco as its default font since release.

Based on new “typographic principles”, San Francisco uses larger spacing between letters, bringing much greater legibility to long blocks of text on smaller screens. It’s therefore very scaleable, a vital characteristic if a typeface is to survive in our brave new multi-resolution, multiple device-based universe. This new default font is therefore worth bearing in mind for any mobile app or web designers.

You’ll be happy (or unhappy, depending on how much work you’re getting right now) to hear that the principles guiding icon design for Apple devices remain more or less unchanged on iOS 9. We see a few new icons for Apple’s default apps, and of course, a slight visual change to the home screen thanks to the new system font.

Thankfully, though, it’s more or less business as usual. There’s no need to go back and radically overhaul your app icon, as many devs had to do following the release of iOS 7.

Having said that, icons are now slightly more prevalent throughout the system than they were before. Take, for example, the two-step login process, or the Action Center. Small, functional ‘phone’ and ‘wallet’ icons now have an increased presence, making the interface look a bit more lively. 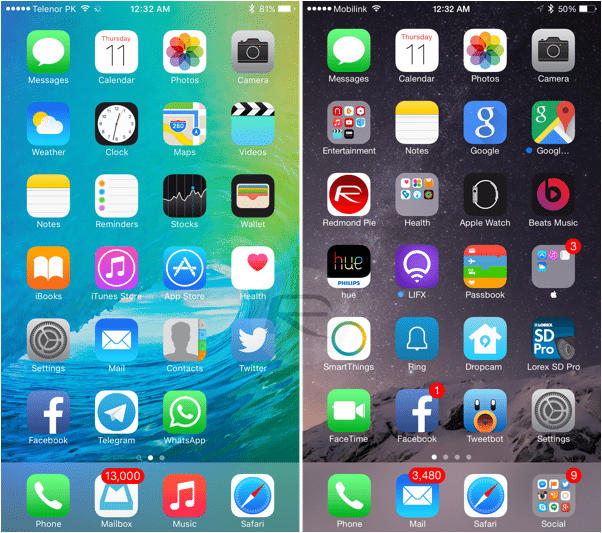 While most of these changes seem rather ornamental, the biggest changes have come to the iPad and iPad Mini in the form of new multitasking features, of which there are three:

Split View Apple seem to have taken a leaf out of Microsoft’s book with this Windows 8-style split screen feature. It allows two apps to be operated simultaneously on a single screen.

Slide Over This allows you to operate an app in a 1/3 screen size side panel, much like split-screen. This is particularly useful for operating a feed-based app while you read content in the larger panel – however, unlike split-screen, both apps are not active at the same time.

Picture in Picture If you’ve used Facebook’s insufferable Messenger app and its so-called ‘chat-heads’, you’ll already be familiar with the basic principle behind Picture in Picture. Put simply, it allows users to engage with video content (such as Facetime or Netflix) while they continue to browse other apps.

The implications these changes have for resolution changes, particularly for browser content, means that scalable mobile-first design is more important than ever.

Do we need to worry about it?

Frankly, the visual changes that come with iOS 9 are not really something designers need to worry too much about. If you’re already producing mobile-first web content, or scalable visual content such as apps, nothing here is particularly groundbreaking.

However, these small visual changes—and indeed, the large structural changes—may point to much greater alterations in the future. It seems Apple are trying to shift slightly away from a web-based OS, as we can see in iOS 9’s focus on productivity and organisation. The multitasking features alone may have numerous implications for Home Screen and app design – implications which are yet to become clear. It will be interesting to see these trends progress over the next year or so.