Life after death: GUIs, icons, and beyond the infinite

Much of our current computing paradigm is graphical. No matter what device or platform we use, we are interacting with visual data and stimuli more or less constantly. In fact, it’s difficult to think there’s ever a future for digital technology that is not based on visuals – despite sci-fi films such as Her (2013) doing a good job of exploring such themes.

Hopefully the end of graphic interfaces isn’t going to be any time soon (I like having a job), but as we move closer and closer towards icon-centric user interfaces, it’s interesting to think about some of the possibilities for the future of digital interaction. Specifically, will there come a time when graphics – and app icons – are completely redundant?

We’ll start off with something a bit closer to home. Most people have heard of Google Glass (i.e. Google’s stupid-looking-but-completely-awesome-wearables) and seen others wear them, but relatively few people know how the interface actually works unless they’ve used it firsthand.

Well, Glass still relies on a GUI, so it’s hardly reached The Singularity or pushed past the graphical paradigm. However, what is interesting about Glass is that it has, for the most part, moved past icons. Relying in part on touch interactions, but mainly on voice recognition, Glass nixes the app icons we’re used to interacting with in favour of ‘cards’ (which you might also have seen on your Android smartphone). These widgets display information directly and users must scroll through them – unlike on smartphones, where users are presented with a large set of app icons at once.

The main benefit of this for what Google are trying to do with Glass is that the cards are transparent and always secondary to the experience someone is having. For example, shopping lists appear while someone is walking around a shop. The point of Glass is to help people carry out the things they do day-to-day, without really getting in the way:

“Glass is designed to be there when you need it and out of the way when you don’t.” 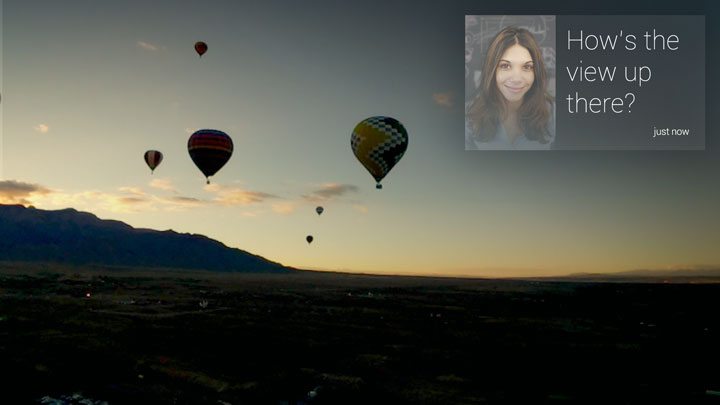 Does Glass represent a move beyond GUIs? No, but it’s a start. What it does represent is a move away from visual-centric interfaces, towards input-centric interfaces. The tactile, aural and physical interaction the user has with the interface is much more important for usage than, say, the visuals. This is highlighted by the minimalist and info-centric nature of Glass. It gives us a glimpse into a non-graphical future, where visuals – or, certainly, the process we go through to access information – are subordinated to a direct presentation of that information itself. Effectively, it cuts out the middleman.

Google Glass shows us that it’s possible to successfully develop an interface that starts to rely much less on visual data. However, there’s also models of computing that have already moved far beyond the need for visual data whatsoever: haptic displays.

Put simply, haptic displays “provide users with artificially created tactile sensations” – they “recreate the experience caused by contact between a tool and an object”. Researchers at the University of Tokyo have developed haptic holograms – i.e. holograms that users can physically manipulate and feel. Although it’s still early days, this represents a potential revolution in computing. If the purpose of a GUI is to visualise non-physical data, it must surely become redundant when that data is itself physical. Obviously, it is still visual information – but mere representation is no longer central to the experience. At the very least, it could spell the end for app icons as we know them – who needs a ‘Settings’ icon when we can just reach out and grab the spanner itself?

Thankfully, app icons are going to be around for quite a while before haptic holograms become an everyday reality. You can read more about app icons (and how great they are) here.

Should I use my brand logo and app icon interchangeably?
Style and consistency

Life after death: GUIs, icons, and beyond the infinite