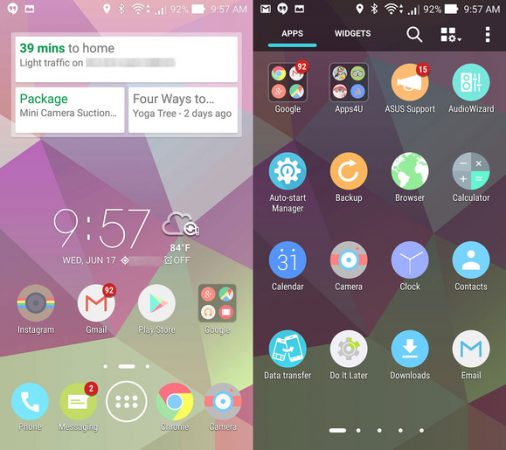 In our last post in this series, we introduced three iterations of Android and their app icons: the vanilla OS, Samsung’s S-series, and LG.

Weirdly, Google’s stock Android icons have stood out the most so far, probably thanks to the company’s coherent and unified design philosophy—something that others are lacking. LG’s app icons, however, are particularly impressive, offering a colourful and straightforward alternative to the stock icon set.

However, it doesn’t stop there. There are quite a few more companies developing their own versions of Android, and it’s worth taking a look to see if they’ve got anything to offer. Without further ado, let’s check out the app icons of HTC, Sony, and Asus.

Smartphones might not be the first thing you think of when someone mentions Asus, who are more famed for their laptops and PC hardware than anything else. However, they have been producing a range of Android smartphones for a while now in the form of the ZenFone series.

Asus have actually gone to some length to make their default Android UIs stand out, with multi-coloured brush strokes and really nice white silhouette icons throughout. It’s a shame, then, that the app icons themselves are pretty basic and underwhelming. They’re all square and tend not to stray from the flat icon formula. As Andrew Williams of TrustedReviews points out, “Asus has given the phone a different look, not too much of a functional change.”

However, there are some nice touches. Each icon has a subtle shadow, which gives them an almost-flat feel. The icons that really stand out are those for ASUS’ own apps. While the company are frequently criticised for the vast amount of bloatware on their devices, these inject some much-needed different shades of colour.

What makes the Zenfone 2 stand out when it comes to icons, though, is undoubtedly its Themes application, which gives users easy and quick access to a wide range of icon packs—making the phone look and feel a lot nicer.

Since their earliest mobile devices, Sony have been making a conscious effort to try and make their GUIs stand out. Sadly, this often manifests itself as heavy, clumsy skinning, and has traditionally resulted in bloated, slow, and buggy user interfaces—if nice looking and Playstation-y.

Their interpretation of Android is no exception. It is actually laid out very similarly to vanilla Android—but the horrible icons do not gel whatsoever with the Material Design elements scattered throughout the rest of the GUI.

Sony’s versions of Google’s icons for their own apps is actually pretty nice, putting a glassy, almost 3-D twist on what are usually quite flat icons. However, the icons for their own native apps are hideous. It looks like they’ve just used Microsoft Office fill effects. I get that Sony have been milking this retro, button-y look since the original Walkman, but honestly? They’d be great on a game controller, but they’re not on a home screen.

Maybe this is helped by the monochrome launcher wallpaper, but HTC’s app icons for the HTC One really stand out. They’re simple and straightforward enough – there’s a lot of soft shadow and subtle fading used, but they’re also really differentiated by shape. They haven’t just resorted to making all their icons the same square or circular shape, but actually use different shaped icons to make navigation easier.

Tasks and Calendar are given a similar, blocky square shape with lists and tables to signify organisation and different colour schemes to differentiate between them. The camera and contacts icons, meanwhile, also share a similar shape, with blue and green to make them distinct and personal. The Google app icons use body colour to stand out, and all in all the shape of the icons guides the eye much more naturally across the screen. All of the icons are colourful, with depth and distinctive elements. Tied with ASUS’s Themes feature, it’s a potential winner.

2 thoughts on “Android Battle Royale (part 2): Which iteration of Android has the best app icons?”