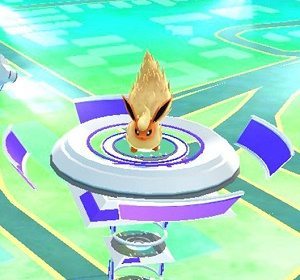 In our last post, we explored the Pokémon Go interface in a couple of different ways – with a particular focus on how its well-designed icons help make its otherwise sparse and unintuitive interface aesthetically pleasing and usable.

As an almost entirely map-based app and one of the most ‘popular’ games in the world currently, I’m also interested in examining how the app works (or doesn’t) to resolve many of the common shortcomings developers run into when creating a GPS-oriented augmented reality app – so let’s take a look at that today.

Just to remind you of what Pokémon GO is:

The game really needs no introduction, but for those of you who have been living under a rock, Pokémon Go is an augmented reality mobile game based on the popular Pokémon series. Players use the GPS features on their phone, a customised world map, and their smartphone camera to find, capture, and battle virtual creatures.

With re-introductions out of the way, let’s get down to business.

The problem with maps

We’ve looked at this in more detail before, but to summarise: a hell of a lot of maps now rely primarily on GPS and map interfaces as the main point of use for users. Maps are great in a lot of ways, as they allow users new and additional ways of interaction with the world around them by augmenting reality.

Pokémon Go is, naturally, an ‘augmented reality’ game, but contrary to popular belief, an app does not need to be a team-based game or utilise a fictional in-game mythology in order to augment a user’s reality. Augmented reality “adds graphics, sounds, haptic feedback and smell to the natural world as it exists”, explains HowStuffWorks. It is “technology enriching the real world with digital information and media.” That’s why Google Map recommendations could be considered an augmented reality feature, or any app that aims to represent additional information about the physical world in a virtual space.

Many of the hurdles developers run into from a design perspective relate to the issue of representing real-world places and things around the user. Too often, developers rely on recycling stylistic tropes from Google Maps and other generic GPS apps to convey this information to users – which is sad, because there are so many possibilities for giving users new ways of relating to their surroundings. So how does Pokémon Go match up?

We said in the last post that the Pokémon Go UI in general isn’t very good – at least, the overlay is unintuitive and exhibits an over-reliance on icons in order to make it usable. However, it’s a different story when it comes to the map interface itself.

The so-called map view features the overlay icons, as we’ve explored previously, but the way it represents locations on the map is particularly unique and useful. Pokéstops, small monuments or locations where players can get ahold of Pokéballs, potions, or eggs are represented by small blue plaques with a Pokéball logo floating above them. Once players approach these stops, they can spin the Pokéball around to reveal information about the location, giving users a greater insight into the general area, which will also dispense important gameplay items.

Meanwhile, gyms are made up of three tiers and the Pokémon they represent floats above them in 3D. Beams of light above these landmarks help make it easier for users to find gyms on the horizon. This use of height difference is rarely explored in most GPS apps, but by creating a clear visual hierarchy, it makes the map much easier to navigate. This is a really nice move away from the ‘pin’ system that most augmented reality apps rely way too much on, as it allows users to prioritise where they want to go in game.

There are a couple of issues remaining with the map itself though. It’s often hard to distinguish what the different colours on the map represent, and it’s also difficult to quickly delineate between the green of the map and the location of Pokémon as represented by animated grass. This isn’t helped by, again, the newbie-unfriendly overlay GUI.

Pokémon Go’s GUI design is problematic, to say the least. It falls really flat in a lot of areas by failing to represent its different features adequately to users, and its icons simply aren’t good or abundant enough on their own to resolve this issue. They really need to go back to the drawing board and patch this issue. On the other hand, Go takes a novel approach to augmented reality by prioritising the different kinds of locations users might want to see.

This could provoke some really interesting changes to vanilla GPS apps – users could, for example, rank their ‘nearby’ search preferences in terms of food, bars, venues, shops etc, and these could be represented through visual hierarchies of each location. Either way, the app has truly opened the doors on augmented reality, and something tells me this is just the start!