Infographics (or ‘information graphics’) are nothing new, dating back as far as the early 17th century. However, with the development of photoshop and an online culture of ‘sharing’, infographics have taken on a renewed importance. Their applications are endless, and are produced by anyone from marketing firms to educational or political groups.

An infographic breaks down large amounts of information into visual chunks, allowing readers to digest it much faster than, say, a ‘wall of text’. This is a good illustrative example of an infographic – each section of information is divided up, with different images used to represent different causal factors or motivations behind the phenomenon in question (recycling). 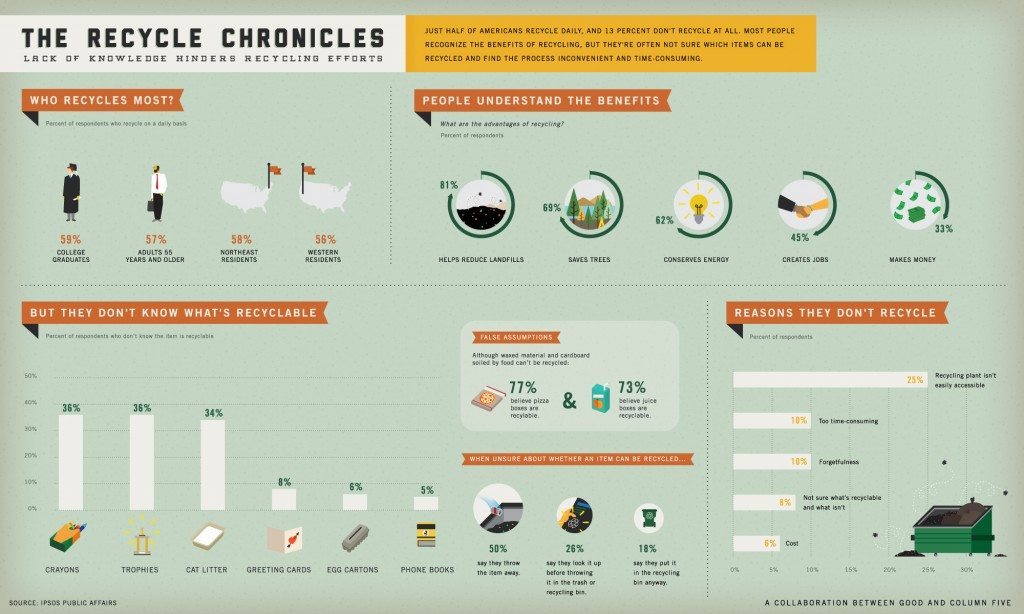 Infographics are so effective precisely because the human brain is said to process visual information 60 000 times faster than text, and they’re common enough now that infographics practically saturate other methods of how we engage with new information online. One possible way of retaining the efficacy of infographics whilst standing out from the crowd is to create motion infographics. Today I’d like to explore how this has been done successfully in the past, and how it can be developed further as a medium.

First, we have to ask: what does video allow us to do with infographics that static images do not? The immediate answer is that it allows us to combine the graphics with sound or narration (link to the two posts on this topic). As we can see in this excellent animated infographic about Twitter, a video or animated format not only allows us to animate infographics but also include a narrative soundtrack to explain what it is that the viewer is seeing in depth. The strength of this is obvious: information is now being transmitted in an audio-visual fashion, with the added advantages of the graphic medium.

The Vlogbrothers’ Crash Course series is an example of animated infographics put to good use. Each video is presented by one of the brothers in a hybrid style between ‘vlogging’ and classroom teaching. However, where the series draws its strength as an educational one is through its complementary use of animated infographics. Each episode has a ‘Thought Bubble’ segment, whereby motion graphics are heavily used alongside high-res images and narration (see below). The animation tends to play to the format of infographics themselves, with the camera moving in a similar direction as the one eyes would read an infographic. (Another excellent example is the RSA Animate channel)

This opens up possibilities for motion infographics in a marketing or product demo context. The ideas are explained through voice and exemplified through the screen, whilst the format allows us to jump between, or even juxtapose, camera images and animated ones. This could be seen as an informational maximisation of the online video and graphic formats: it enables us to take the advantageous features of each and therefore maximise how far information about something is interpreted and understood by the viewer or reader.

Soundscapes in promotional and product videos: Voice and narration
2D or 3D: the advantages of hybrid animation (Part 1)